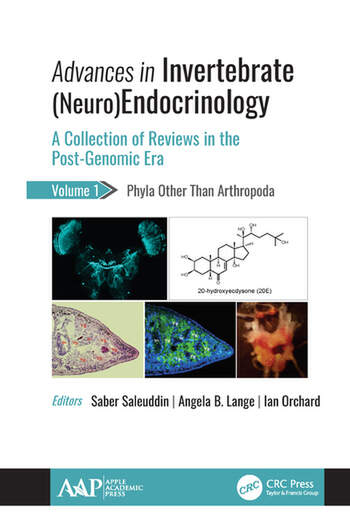 Advances in Invertebrate (Neuro)Endocrinology (2-volume set) provides an informative series of reviews from expert scientists who are at the forefront of their research into the endocrinology of invertebrates. These two volumes are timely and appropriate in this post-genomic era because of the rapid pace of change brought about by genome projects, functional genomics, and genetics (omics technologies). The volumes show the rich history and strong tradition of cutting-edge research using invertebrates that has opened up our broader understanding of comparative endocrinology and the evolution of regulatory pathways and systems. These reviews set the scene and context for this exciting new era of understanding that has come from this post-genomic revolution.

Volume 2 focuses on arthropoda while Volume 1 discusses phyla other than arthropods.

This book undertakes the daunting task of covering most of the diverse endocrine systems that exist among invertebrates. The chapters in this book will not only advance our knowledge of invertebrate endocrinology but also of endocrinology in general, making the book valuable to researchers and students.

3. Adipokinetic Hormone: A Hormone for All Seasons?
Heather G. Marco and Gerd Gäde

6. Hormonal Control of Diuresis in Insects
Ian Orchard and Angela B. Lange

Saber Saleuddin, PhD, is a University Professor Emeritus in the Department of Biology, York University in Toronto, Ontario, Canada. He received his early education in Bangladesh and received his doctorate from the University of Reading in the UK. His studies on biomineralization in molluscs started at the University of Alberta in Edmonton, Canada, and continued at Duke University, Durham, North Carolina, in the laboratory of Karl Wilbur. Though offered a teaching position at Duke University, he accepted a faculty position at York University, where he still teaches. His outstanding contributions in teaching, research, and administration were recognized by York University. He has published extensively in international journals and has co-edited five books on molluscan physiology. He served as co-editor of the Canadian Journal of Zoology for 18 years and was president of the Canadian Society of Zoologists, from whom he received a Distinguished Service Medal.